'Member the Alamo? is a FPS shooter loosely based on the historic battle that birthed Texas. You will fight alongside larger-than-life heroes William Barrett Travis, Jim Bowie, Davy Crockett, and his trusty gun Betsy as you defend the Alamo from Santa Anna and his Mexican army that outnumber you 100 to 1.

This isn't your pappy's Alamo though as you will switch back and forth between the siege defense levels and HILARIOUS SKITS that will influence the next day's battle. 'Member the Alamo? is one of the first serialized video games where you will tune in periodically to see what zany things these heroes are getting into and how their antics affect the next day's battle.

'Member the Alamo? has massive siege battles with over 100 A.I. enemies at once. You must prevent the enemies from scaling the walls with their ladders which can be physically pushed over, while also monitoring the damage of the fully destructible walls. The odds are overwhelming, but with the help of your A.I. companions you can become a hero of the Texas revolution and be 'Membered for ages. Nothing snooty here, just good old fashioned video gamey fun. That's what Blue Collar Games is all about-- games made by men with calluses on their hands. 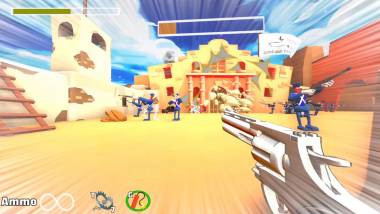